a collage on yom hazikaron and yom haatzmaut


Now that we live here, i am definitely feeling yom hazikaron more this year than before. Now that we are committed to this place, i feel this day as the moment in the present which links the past and the future. Those who fought and fell did so in order that i can live here with my family in the security which i enjoy; and i move through this day with the awareness that one day, if Moshiach does not come first, my children will be part of this awesome group of men and women who protect us all.


has anyone ever thought about the significance of yom haatzmaut falling in chodesh iyar? i am noticing that from rosh chodesh, it's all already yom haatzmaut, kind of like how all of kislev is now chodesh chanukah. iyar is the month that is represented by the bull. Nissan is represented by the lamb - it stands for Hashem;s chessed to us, how He took us out of Egypt when we did not deserve it, gave us everything, and we followed Him like a lamb. and had no abiltiies or merits of our own. Iyar is the month when, like the bull, we rebel and exert our power in a rebellious way. also it is the month when Hashem withdraws His support, so that we can learn to walk by ourselvesa, so that like the bull we can discover our own strength and be ready to meet Hashem as equals who stand on our own feet (almost - not really equals, obviously, but with our own abilties like a husband and a wife in a marriage) in the month of sivan, which is represented by the twins - gemini, two individuals together. and i can see wehre it could be taken to prove that the medina/yom haatzmaut is a sign of our rebelliousness against Hashem. And also that it could be taken to mean that we were intended to discover the abilties and strength which Hashem gave us, to stand on our own feet before He meets us, like at har sinai, in a relationship which this time will never be broken.

Photo melange of the famous image of three young soldiers standing  by the kotel, which they have just liberated, alongside a photo of the same three soldiers today. 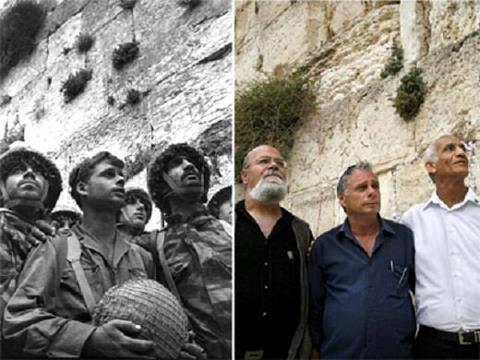 Tell me what you think

Newer Post Older Post Home
Subscribe to: Post Comments (Atom)
Noonlight: a made-up word meaning a bright light, as that of the sun at noon. Moonshine: Adj, 1. nonsense, foolish talk. 2. illegally brewed alcohol. Also the soft light of the moon.
Because some things must be examined in the bright light of day;
and some show their beauty best in the soft glow of the moon.